The advancing expansion of DC grids, the integration of DC microgrids, and the proliferation of DC charging stations for electric vehicles - where the DC energy transferred needs to be accurately measured for accounting purposes - are all driving the demand for DC meters. As soon as the meter readings become the base for billing, the consumers have a vested interest in the DC meter's reliability and precision. It becomes a matter of trust to ensure proper verification, calibration and certification of the DC meter used (e.g. Eichrecht conformity resp. E-VDE-AR-E 2418-3-100).

Figure 1 illustrates the connection of a DC charging station between the grid and the EV with the energy flow while charging. Figure 2 shows a DC microgrid and the use of DC meters for energy generators and consumers. A precise power measuring instrument like the LMG600 series power analyzer can be used for pre-compliance tests by meter manufacturers, it can serve as traceable standard for meter certification, and it is a tool of choice to verify the proper functioning of DC meters once doubts arise.

The LMG600 provides highly precise DC power and energy measurements. It can directly capture the pulse output of a digital DC meter and calculate its measured energy over a freely definable number of pulse intervals via the built-in script editor. The comparison between the evaluation of the pulses and the energy measured directly by the LMG600 can be visualized in a meaningful way using the powerful CustomMenu feature. Where other power analyzers struggle, the LMG600's unique timing features make sure pulses and measurement cycles remain perfectly in sync.

To make sure the comparison is valid, the time intervals covered by energy meter and power analyzer need to be identical. This is where traditional power analyzers often struggle, and as a consequence test engineers need to introduce unreliable assumptions regarding the behavior of the energy flow over time. Precise measurements are replaced with guesswork, and the integrity of the meter verification is jeopardized.

The energy to be measured is generated by a precision power supply and fed both into the energy meter and the reference instrument, here an LMG600, in parallel. In addition, the energy meter's pulse output is connected to the LMG600's external cycle input, allowing the analyzer to synchronize its measuring cycle for voltage, current, power, energy etc. to the meter's pulses. Since the external cycle input is sampled with more than 5 MHz, the pulses will be captured reliably and precisely. Figure 3 shows the basic measuring setup with an LMG641 power analyzer. 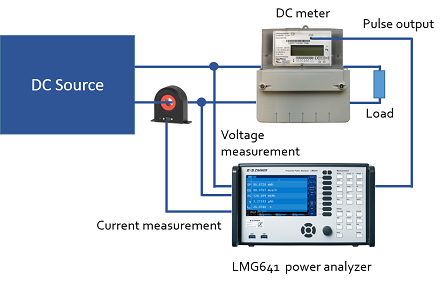 Once the pulse intervals are synchronized to the measuring cycle of the power analyzer, their length can be recorded. In combination with the use of a highly stable and accurate DC source, this permits easy verification of the accuracy of the intervals and thus the energy counted.

The LMG600 series offers the possibility to customize the GUI so it mimics a specific application. This CustomGUI can be fed with values from the built-in Script Editor (both are available free of charge upon request), which allows to calculate values that are derived from diverse measurement inputs and typically lie outside the scope of run-of-the-mill power analyzers. Through the combination of both, all application-relevant parameters and only those can be displayed, such as:

In most of the DC meter verification and certification tests the energy will be measured over a number of pulses, i.e. a dose measurement. The user can set the desired number of pulses in the CustomGUI.

The CustomGUI offers a Start button to begin capturing the pulses from the DC meter and start the energy measurement, which will automatically terminate after the pre-configured 5 pulse intervals. The LMG600 displays, and in parallel logs, the readings and scripted variables of interest for each interval. Figure 4 shows the processing of the captured pulses.

Once the set number of pulses is reached, the script furthermore calculates the deviation between the energy measured by LMG600 and DC meter and displays it in the CustomGUI. This procedure can be carried out several times to verify the repeatability. The data can then be exported in CSV, Octave and/or Matlab format. Figure 5 and Figure 6 show the custom menu and the underlying script. Figure 7 shows the data getting logged in parallel. 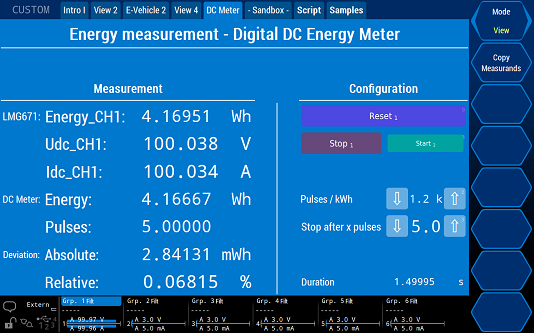 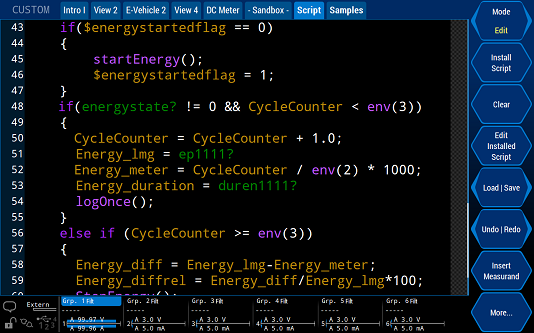 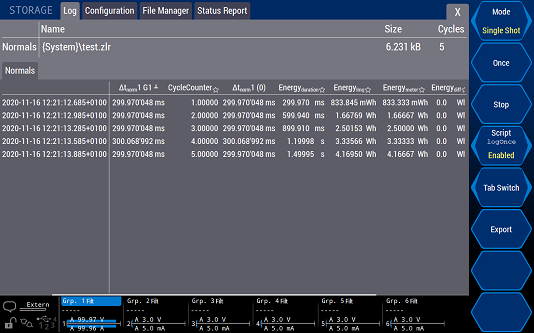 Figure 7: Data logging of the parameters of interest

The LMG600 series power analyzer offers an all-in-one solution for the verification/calibration of DC energy meters. The DUT gets connected directly to the reference instrument, and the measurement is carried out in a single pass. There is no need to stitch together data from different sources, no risk of incongruities, no gaps in the data, no manual reconciling of files, no additional error influences from additional pieces of equipment. The results are displayed immediately in a meaningful and concise manner, and they can easily be exported in various convenient formats, like CSV, MATLAB or TDMS.

The measurement procedure described above uses the LMG600's built-in custom menu/script editor and runs on the analyzer itself. In order to replicate the same functionality in a remote-controlled test bench, we can make available a suitable python script interacting with the LMG600 via the Gigabit-Ethernet interface upon request. It comes with a ready-to-use and well documented python class including functions as open and close interface, write, read and many more.