Why one A/D converter per channel is not (always) sufficient

In conventional power analyzers, a signal first undergoes analog conditioning. Then the output is optionally fed through an antialiasing filter (AAF) before it gets digitized by an A/D converter and awaits further processing. The decision for  or against the AAF has to be taken before sampling, as this is when aliasing occurs. It cannot be undone later on. RMS values can be determined without risk of aliasing due to their statistical nature, all other measurements need to   be handled with care. Due to the limitation to a single A/D converter, there are inherently some downsides to be factored in with conventional devices. If the goal is to measure RMS power both over the entire bandwidth and at the fundamental frequency, unfiltered and filtered measurements could be alternated – in theory. In practice, it is of utmost difficulty to exactly reproduce the same operating point twice. Unless this can be guaranteed, all comparisons  between results are void due to lack of repeatability. Besides, this procedure is extremely time-consuming. If one variant is skipped in order to save time, the results are inevitably error-prone. If the filter remains activated to avoid aliasing with the FFT, bandwidth gets sacrificed when measuring RMS values. Switching off the AAF voids the FFT. If it is carried out nevertheless, the quality of the results is questionable. An aliasing error of 50%, for instance, is easily detected, however a deviation of 0.5% could go unnoticed.

In the end, all of the aforementioned measurement methods are merely unsatisfactory compromises. This is why ZES ZIMMER has fundamentally redesigned signal processing and developed the DualPath architecture. The analog side is the  same as in conventional measuring devices, however the subsequent digital processing has been revolutionized. Only power analyzers of the LMG600 series are equipped with two A/D converters in two independent signal paths for  each current and voltage channel. One, for the filterless measurement of the wideband signal, and another, for the narrowband signal at the output of the antialiasing filter. The parallel processing of the digitized sample values gives the user access to both measurements of the same signal, without risking aliasing effects. 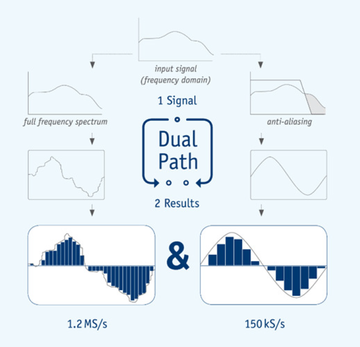 This unique procedure avoids all of the downsides of previous approaches and guarantees the most precise result in the shortest time possible.